Our MD, Anne Wilson, was at Buckingham Palace on Friday March 11th to be presented with her MBE by HRH Duke of Cambridge. 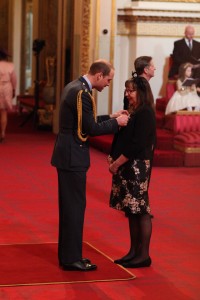 Speaking after the ceremony Anne described the moment as surreal.  “Nothing prepares you for the experience of being inside of Buckingham Palace.  It is totally amazing.  The ceremony itself is carried out with such military precision but everyone we met from the policemen on the gate to the Palace staff was very welcoming and gracious.

It was such an honour to be in the company of so many people who have achieved so much from educationalists to actors, veteran footballers to those receiving honours from the military.

Anne joined Numill as a bookkeeper over 15 years ago worked hard to understand the workings of a precision engineering organisation which serves high calibre clients in automotive, rail, energy and aerospace industries

Following a period of structured learning with an accounting qualification, a degree in management, post graduate qualification in strategic management Anne then bought Numill in 2006 to become sole Director & shareholder in a Management Buyout.  .  A further acquisition in 2009 enhanced manufacturing capabilities in house where we produce bespoke and special tooling, offer sub-contract machining together with components or machine parts for our clients.

Using the recessionary pressures and export expansion Anne further enhanced her desire for lifelong learning to become a Chartered Manager in 2011.

It is Anne’s wish that this achievement be viewed as, not just a personal triumph, but an encouragement to others, especially young people both female and male, that hard work does pay.